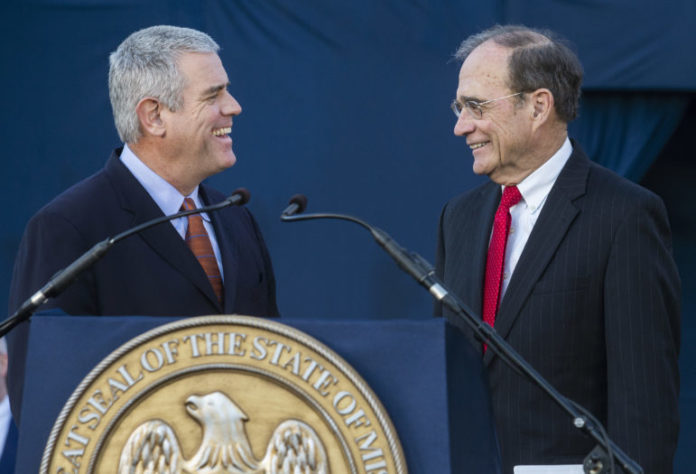 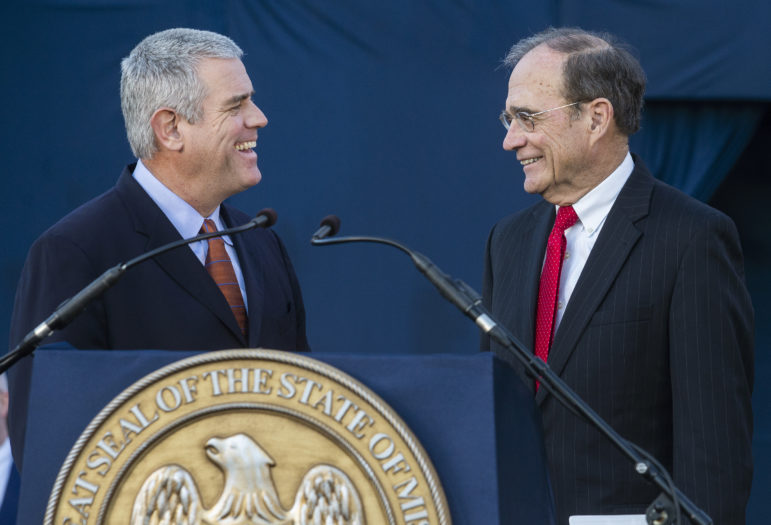 House Speaker Philip Gunn, left, and Lt. Gov. Delbert Hosemann share a laugh before the State of the State Address at the State Capitol Monday, January 27, 2020.

Legislative leaders spent most of the day Wednesday discussing plans to return to the Capitol as early as Monday to consider legislation that would keep Gov. Tate Reeves from having sole spending authority over the $1.25 billion coronavirus stimulus windfall from the federal government.

Reeves has said the past several weeks that he would dole out the CARES Act funds himself but has added that he would work with lawmakers and that “the Legislature should have a significant role in how that money is spent.”

But legislative leadership worked this week to take matters into their own hands, aiming to return to the Capitol as soon as Monday to pass legislation that would strip Reeves of the spending power, several lawmakers told Mississippi Today on Wednesday.

House Speaker Philip Gunn, the third-term Republican, called GOP caucus members in a conference call on Wednesday night and told them to be prepared for a Monday return to consider the legislation. Lt. Gov. Delbert Hosemann, the first-term Republican, called most of the state’s 52 senators in several phone calls on Wednesday to discuss the governor’s spending authority.

“We’re not going to bow down to the governor to let him spend this money by himself,” a high ranking GOP lawmaker told Mississippi Today. “The people’s legislature should have input. It’s not legal for him to do it, and it’s not the right thing to do. We’d be sitting on our hands if we didn’t do something like this.”

The Legislature has been in a coronavirus-related recess since mid-March and was previously scheduled to return on May 18. But several lawmakers told Mississippi Today on Wednesday evening that a Monday return — two weeks earlier than the planned May 18 date — is “very likely.”

Legislative leaders are also considering whether they would have enough votes to override a potential veto from Reeves of any legislation they passed. Two-thirds of both the Senate and House would have to vote to override a veto for the legislation to go into law. Lawmakers in both the House and Senate, in both parties, told Mississippi Today on Wednesday that they felt confident the override votes were accounted for.

The last time the Legislature successfully overrode a governor’s veto was in 2002 when Democratic Gov. Ronnie Musgrove was in office.

Reeves, in defending his authority to spend the money himself, cites a 40-year-old state law that gives the governor the authority to accept and to disburse federal funds in emergency scenarios. He said it was the process used in the past in appropriating federal funds in response to Hurricane Katrina in 2005, the Great Recession in 2009 and the BP oil spill in 2010.

Reeves has said he wants to use the funds in a variety of manners, such as making schools more prepared to conduct distance learning should another event occur forcing schools to be closed; providing training and financial help for workers who lost their jobs because of the pandemic; helping local governments.

“We have to be transparent,” Reeves wrote on Facebook Tuesday night. “We have to be careful. We have to make sure the money gets in the right hands because there are always some people who want to take advantage of a crisis.”

But legislative leaders suggested to their members on Wednesday that transparency would be in question if the governor had the sole spending authority. On one of the calls with senators, Hosemann said that legislators, who are elected to represent individual districts, know how better to spend the funds than a single governor.

Several House members told Mississippi Today that the state Constitution clearly gives the Legislature such spending authority, and clarifying language in state law would solidify that.

Staffers for Gunn and Hosemann did not return requests for comment on Wednesday.

The federal funding in question is part of the $2 trillion Coronavirus, Aid, Relief and Economic Security Act that Congress passed in late March. The bill provides funding in a litany of areas as a response to the COVID-19 pandemic, including help for individuals, businesses, educational entities, state public health agencies and various other aspects of state and local governments.

Included in the massive bill is a $340 billion package for state and larger local government to help with expenses associated with the pandemic. Mississippi’s share of that particular section of the bill is $1.25 billion. No local government in Mississippi was large enough to qualify for a direct earmark under the bill.

Under the federal guidelines, the $1.25 billion the state is set to receive in CARES Act funding is not supposed to be used to fill budget shortfalls caused by the current economic downturn related to the pandemic.

In a virtual town hall meeting on Tuesday night, state Rep. Jarvis Dortch, D-Jackson,  became one of the first legislators to say publicly that he believes the Legislature, which has the duty to appropriate funds under the state Constitution, should have input in spending the funds. He added that a portion of the funds the state is receiving should go to local governments to help offset their coronavirus-related expenses.

“We are going to be pushing for the Legislature to have a say in how the money is spent,” Dortch said on Tuesday night. “(The local governments) need to be reimbursed for the work they have done.”

Rep. Robert Johnson of Natchez, the House Democratic leader, said in the coming days Democrats will be sending in a formal letter a list of projects they believe the federal money should be used to fund. Johnson said the Legislature should be involved in the process.

“It would make sense for (Reeves) to sit down and collaborate with us,” Johnson said. “A lot of the funds should be spent within the framework of the legislative appropriations process.”