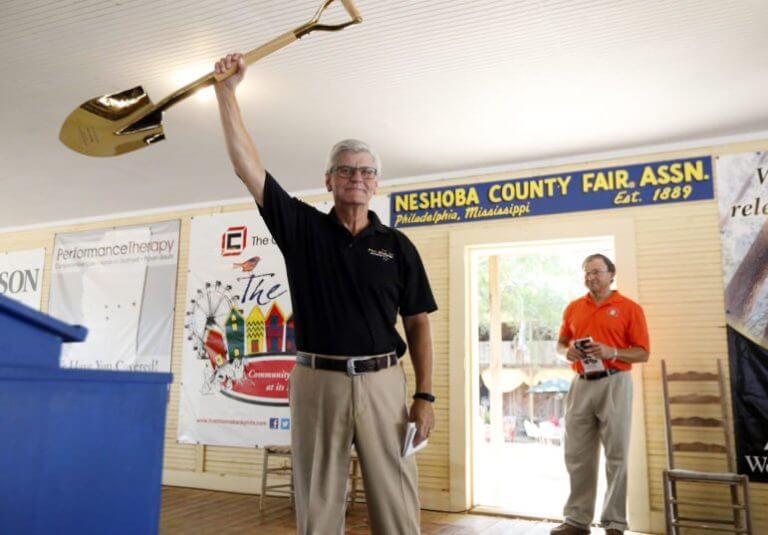 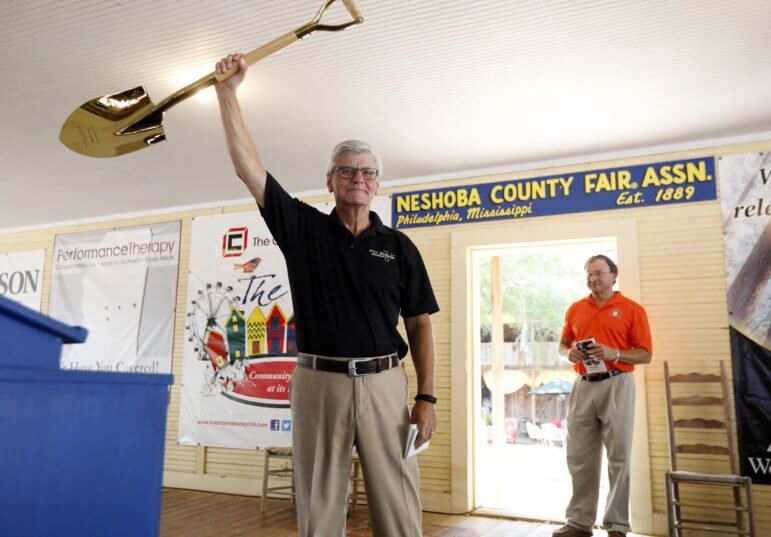 Mississippi Republican Gov. Phil Bryant shows off a gold shovel he was awarded for the state’s economic progress as he leaves the stage at the Neshoba County Fair in Philadelphia, Miss., Thursday, July 27, 2017. (AP Photo/Rogelio V. Solis)

The need for workforce training opportunities for low-income and underemployed Mississippians existed long before the pandemic began in March.

But despite efforts by the state’s economic development and business leaders in the last few years to consolidate workforce development information, officials still don’t know the scope of taxpayer-funded training happening across the state and its results, several officials told Mississippi Today.

In a state with one of the lowest median household incomes in the nation, just under $45,000 in 2018, leaders have often pointed to workforce development as the answer to raising earnings and curbing poverty.

A key workforce initiative began in 2016 when the Legislature agreed to allocate $50 million over 10 years for then-Gov. Phil Bryant’s Mississippi Works Training Fund, which was supposed to help community colleges and other workforce training programs bulk up their operations. The program is administered by the Mississippi Development Authority, the agency tasked with spearheading economic development in the state.

By March, nearly four years in, the state had spent less than 10% of that funding, or about $4.7 million.

Though it allocated $1 million of the fund last year to the much touted Mississippi Works Apprenticeship pilot program, none of that money had been spent by March, according to documents Mississippi Development Authority provided Mississippi Today through a records request.

Excluding $607,000 spent on the Career Tech Scholars program, which offers tuition assistance to students across the state, nearly 80% of the funds spent so far have been concentrated on the eastern part of the state, nearly delineated by Interstate 55 and which is just 31% Black.

The Delta and southwest quadrant encompassing the capital city, an area that is nearly 60% Black, has received just $235,590 and $719,285, respectively.

“It is now time to make the investment in Mississippi’s workforce before it is too late,” Bryant said in his 2016 State of the State address. “We have $50 million sitting idle in the Unemployment Trust Fund. Let’s invest it now in workforce training, and I will show you Mississippi’s greatest potential. We can lead the nation in economic development if you will give us the tools to reach these goals … Rush with me through the entrance to the future, or stand behind as it closes on the careers of Mississippi’s next generation. The choice is yours.”

The Legislature did not use money from the Unemployment Trust Fund, but made a separate allocation to pay for the $50 million Mississippi Works Training Fund. But the trust fund, which employers pay into through their taxes, does support another training program called Workforce Enhancement Training, sometimes referred to as WET funds, which the state’s community colleges administer based on training needs and requests from employers.

“There is not a conflict with this administration in demanding accountability for these workforce funds,” Bryant added.

“We don’t know where all the dollars are,” said Sen. Joey Fillingane, R-Sumrall, author of the legislation that created the Mississippi Works Training Fund.

Senate Bill 2564, passed earlier this year, restructured the state’s State Workforce Investment Board, which is meant to be a workforce development clearinghouse, to limit its members and allow for it to build up a staff of workforce specialists. It also increased requirements that state agencies and entities report workforce spending and outcomes to the board.

The Mississippi Works Training Fund was intended to “enhance training opportunities at the state’s 15 community colleges,” according to the development authority’s website, with 75% of the money dedicated to new job creation and 25% to existing industry.

Fillingane said the training fund primarily exists as a lure to attract companies to the state. It’s an additional resource for employers who are locating in Mississippi, in the same way that the state may pay for infrastructure improvements surrounding new construction at a business.

“It’s only there in the event that’s what they need,” Fillingane said. “Perhaps we should reduce the number of dollars in that particular pot and put it somewhere where it would be used more frequently.”

WET funds work similarly: “WET funds are primarily used to train company employees on whatever the company needs and wants,” said Andrea Mayfield, director of the Mississippi Community College Board.

In other words, if an underemployed Mississippian wanted to go back to community college to gain a particular skill, neither of these funds would necessarily pay for their training, unless a company had already requested it.

The state awarded nearly $12 million of the Mississippi Works fund by March. Some grants remain open but others have closed before the workforce partners used all the funding.

The first to receive Mississippi Works grant awards in 2016 were the Furniture Academy ($250,000) and Mississippi State University engineers ($169.751) — only a little over a third of which had been spent by March of 2020.

Other companies benefiting from the program include Sephora ($165,396), FedEx ($600,000), Milwaukee Tool ($1.5 million) and Pearl River Foods ($500,000), one of the food processing companies whose Mississippi plant was raided by Immigration and Customs Enforcement agents in 2019.

Gov. Tate Reeves promised a $100 million investment in workforce training while on the campaign trail in late 2019. In July, the Legislature allocated $55 million of its $1.25 billion CARES Act pandemic relief to workforce development, a program called ReSkillMS, about $5 million of which will go to employers through payroll subsidies. Most of the rest will go to community colleges for them to purchase needed equipment and build their training capacity.

All of the CARES money must be spent by the end of the year, meaning jobless Mississippians looking to use this opportunity to gain a new skill will be restricted to short-term training programs, such as truck driving or assistant nursing.