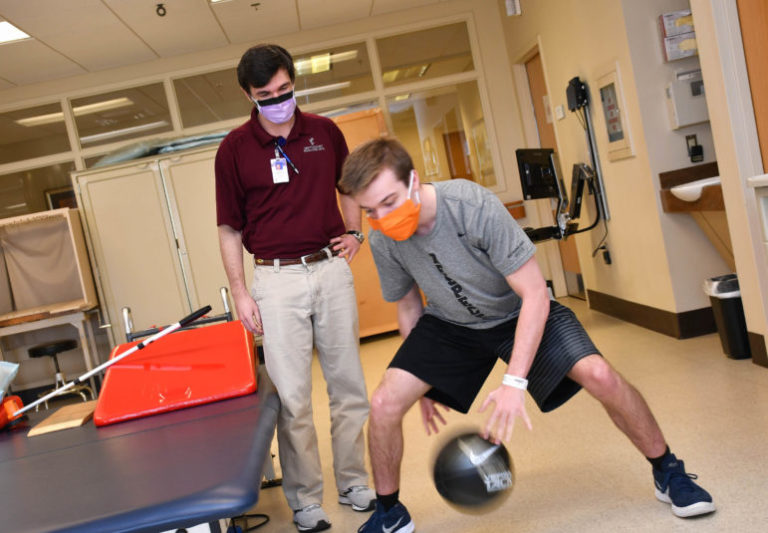 Ole Miss basketball manager has made a remarkable recovery from a horrific auto accident just five weeks ago.

Young Spencer also doesn’t recall arriving at Methodist Rehabilitation Center in Jackson on March 31 – or the first few days of his 22-day stay. He doesn’t remember not being able to walk or talk or straighten his balled-up upper torso. He surely doesn’t remember his parents’ concerns – at first that he might not live – or that if he did live, what quality of life he might have.

But Gray Spencer knows he will forever remember Wednesday, April 22, 2020. That’s the day he “graduated” from Methodist Rehab, walked out of the place on his own, and returned to his New Albany home where he was welcomed by friends and family lining his street. Wednesday was his 22nd birthday.

“The most awesome day of my life,” Spencer said Wednesday evening by telephone from his home. “I can’t tell you how thankful I am and how fortunate I feel. I am blessed. I feel like God put his hands on me.”

For sure, doctors, nurses, therapists have had their hands all over Spencer during a five-week period of seemingly miraculous recovery. When Spencer arrived at Methodist Rehab, he couldn’t lift his head or communicate – much less walk.

Says New Albany banker Bob Spencer, Gray’s dad, “We’ll be forever grateful to all the folks at Methodist. I remember several times in those first few days after the wreck crying when I’d be by myself, not knowing if I’d ever get my son back anywhere close to normal. I was just hoping against hope that someday he could walk with the help of a walker. It was slow at first and then it was like a light went off. The therapists started calling him Miracle Boy.”

Gray’s story of recovery is one worth telling – but first you need some background. Gray Spencer grew up a sports-loving gym rat in New Albany where he was a 5-foot, 10-inch shooting guard for the New Albany High School Bulldogs. New Albany resident John Stroud, the all-time leading Ole Miss scorer and Mississippi Sports Hall of Famer, has known young Spencer all his life and called him “a terrific high school player with a great basketball mind.”

Gray Spencer worked at it. He would make 1,000 shots every day before going to school. Some days he would stay after practice and make 1,000 more. He was tough, too. His high school coaches said he led the state in taking charges.

Nevertheless, there’s little if any demand for 5-10 shooting guards at the college level. So Gray, who wants to coach basketball for a living, decided the next best thing would be to become a manager. He was recommended to Ole Miss coach Kermit Davis, Jr., who says Spencer has become “one of the best managers I’ve had in over 40 years of coaching.”

In fact, Gray was headed back to Oxford from New Albany during an extended spring break (due to the pandemic) to retrieve some of his clothes and also finish a couple tasks at the Ole Miss basketball facility.

He was passing a vehicle on one of the few straight stretches of road on Highway 30 when he apparently edged to far to the left into gravel and lost control of his car, veered over a ditch and into a tree.

“His seat belt and air bags saved his life,” Bob Spencer said. “That’s a call you never want to get, that your son has been air-lifted to the hospital and is on a ventilator.”

Doctors at North Mississippi Medical Center discovered bleeding inside Gray’s brain, surely from his brain crashing into his skull at impact. They opted against surgery, believing the blood would resolve itself. And that’s what has happened although it took weeks.

Clearly, Gray Spencer’s grit and pre-accident regimen of weightlifting and other exercise was critical to his recovery. Said Davis, “Gray was in as good of shape as our players. He’s a heckuva athlete himself.”

Just as clearly, his therapists played a huge role, from physical therapist Kollin Cannon, to occupational therapist Chuck Crenshaw, to speech therapist Taylor Miller. They integrated his passion for basketball into exercises to help him recover.

“We worked on shooting free throws to improve his high level depth perception and coordination,” Crenshaw said. And to work on his weaker left side, Spencer caught firm bounce passes in his left hand while balancing on an unstable surface. Therapists also had Gray dribble a ball with his left hand, so of course he started dribbling behind his back and between his legs. That may well have been what led to “miracle boy.”

Remember, the wreck happened on March 16 before any social distancing and the like. When Gray Spencer regained his senses he found himself in the middle of a pandemic with everybody around wearing masks and gloves.

The extended spring break and the switch to on-line learning at Ole Miss is actually a blessing for Gray, a junior and a secondary math education major with a 3.5 GPA.

“His professors have been very understanding,” Bob Spencer said. “They’re giving him incompletes and letting him take his time. He’ll have until July to complete this semester’s classwork.”

Gray Spencer is eager to get started. “My memory is still coming back to me,” he said. “I’m having to put reminders in my phone about stuff. But it’s coming back. School-wise, I’ll start with the easier stuff and work my way through it.”

Physically, he’s still down more than 20 pounds from his pre-accident weight of 170. Home cooking likely will solve that.

“That’s been a lot of my motivation – to be ready for my senior year,” Gray said.

“I’m gonna get my Masters, and then I’m gonna coach,” he said. “Coaches change lives. I know because my coaches have changed mine. I’d love to coach in college but I’d be perfectly happy coaching high school basketball and teaching math.”

Wednesday, he was just happy to be home – and to have walked into his house on his own.

A GoFundMe page has been established to help the Spencer family with what surely will be exorbitant medical expenses. Donate here.