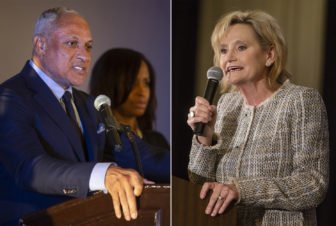 An internal poll released by Democrat Mike Espy’s U.S. Senate campaign on Thursday reports he’s gaining ground and is within five points of incumbent Republican Sen. Cindy Hyde-Smith, to whom he lost by more than seven points in a 2018 special election.

But Hyde-Smith’s campaign released its own internal poll later Thursday, reporting she has a 20-point lead, and her camp questioned the methodology and veracity of Espy’s poll. Many statewide and national politicos don’t consider the race to be competitive, and previous polling has shown the incumbent Republican with healthier leads in one of the reddest states in the country.

Espy is challenging Hyde-Smith in the November general election.

The Espy telephone poll of 600 likely Mississippi voters from July 30 to Aug. 9 reports Hyde-Smith leading with 47%, Espy with 42% and about 3% supporting a third party.

The survey is Espy’s best showing in released polling to date, and he discussed it on a national MSNBC show on Thursday morning.

“The ground is shifting here in Mississippi,” Espy said on MSNBC Thursday morning. “We recently saw it with the taking down of the Confederate flag. Most Mississippians now want to turn the page and move us toward progress … We’re closing the gap.”

FiveThirtyEight, which rates national pollsters, gave the firm a B/C rating.

In a release Thursday afternoon, the Hyde-Smith campaign said “the methodology is awful” on the poll Espy released. The campaign noted that a poll of 600 people should not have taken 10 days to complete, and said it “cherry picked” demographics among independents.

“(The poll) emphasizes that they are on track to lose by less this time,” the Hyde-Smith campaign wrote. “Not sure that’s much to brag about … Mississippi is not a state where you win by mobilizing independents. You win by turning out your base voters, which they admit Espy is failing to do.”

This week’s Espy survey notes previous polls were conducted before protests across the country and in Mississippi over the police killing of George Floyd and the historic decision by Mississippi lawmakers to remove the Confederate battle emblem from the state flag.

The Espy campaign is making race a major issue amid the national debate of racial inequities in government. The campaign has focused on comments Hyde-Smith made in 2018 about public hangings and has accused her of “glorifying Confederate symbols.” The November ballot will also include a referendum on replacing the Mississippi flag, predicted to be a factor in turnout and voting.

“We do have the numbers, and we can win,” Espy said. “We will not only take down the flag in November, we’re going to take out Confederate Cindy and send her back to the museum.”

Some other findings reported in the survey the Espy campaign released Thursday:

Espy’s pollsters also said “Donald Trump is weaker in Mississippi than he was in 2016,” saying he polled 53% to 43% versus a generic Democratic candidate. In 2016, Trump won Mississippi with 58%.

“If Trump wins Mississippi by 10 points, there are not many paths to victory for Espy,” the statement said. “It’s hard to imagine many, if any, voters deciding to vote for Trump and then on the next line of the ballot deciding to not vote for one of Trump’s best allies in the Senate.”

The survey Hyde-Smith released was conducted by the Republican pollster the Tarrance Group, and was also of 600 likely Mississippi voters. It was conducted from June 22-25, with a margin of error of 4.1%.

Tarrance has a FiveThirtyEight rating of B/C.

“(Espy’s) numbers are obviously an attempt by a failing campaign to manufacture press stories and to try to boost fundraising,” Hyde-Smith’s campaign said in a statement. “We don’t blame them for trying, but we think the results on Election Day will be most similar to our polling, just as happened in 2018.”

Espy campaign manager Joe O’Hern, in a statement said: “Things only keep getting worse for Sen. Hyde-Smith. After outraising her 3-to-1 and raising more in July than Hyde-Smith did the entire second quarter, momentum continues to build for Mike Espy … It is clear that Mississippians are tired of Hyde-Smith’s weak leadership and partisan political games ….”