OurTupelo Stay in the Know With OurTupelo
Home COVID-19 Hosemann says session to resume on May 18, business as usual plus pandemic response 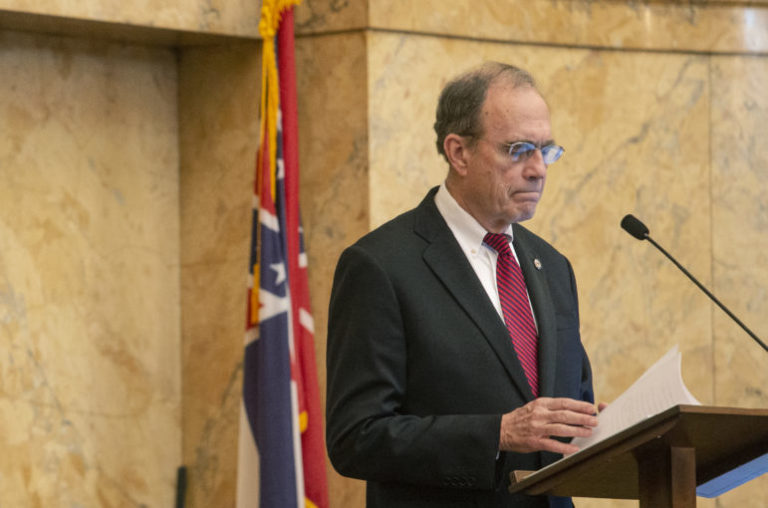 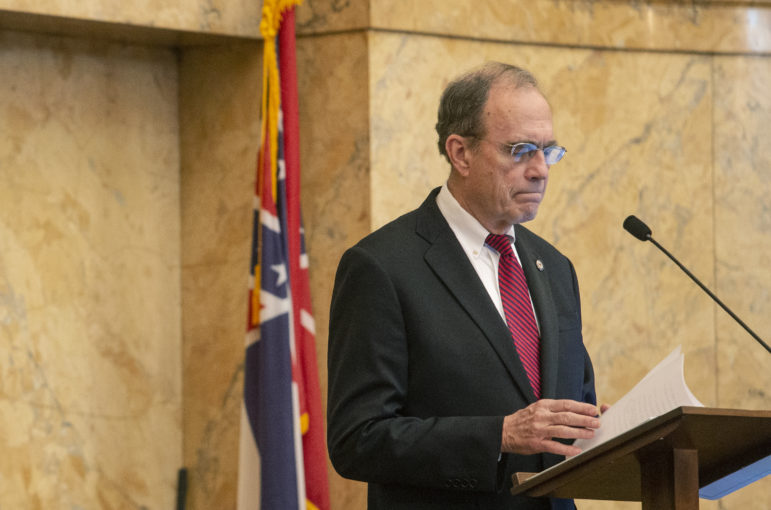 Delbert Hosemann during the opening day of the legislative session in the Mississippi House chambers at the Capitol in Jackson, Miss., Tuesday, January, 2020.

Lt. Gov. Delbert Hosemann said he hopes it is “business as usual as much as possible” when the Legislature returns on May 18 from its coronavirus-induced recess.

Both Hosemann, who presides over the Senate, and House Speaker Philip Gunn announced the return date in simultaneous news releases Monday.

As the releases were sent out, Hosemann, in his first year as lieutenant governor, was speaking during a virtual meeting of the Mississippi State University Stennis Institute of Government/capitol press corps. He said the plans are to take up most of the legislation that was pending when the recess occurred in mid-March and then take up the overall state budget in June.

Hosemann also said he hopes to pass a teacher pay raise when the session resumes as well as increase funding for early childhood education.

Referring to the teacher pay raise and early childhood education, he said, “The things we need to do are generational. Hopefully this pandemic is temporary.”

Early in session, the Senate passed essentially a $1,000 per year pay raise that will cost about $75 million annually. It is pending before the House.

“I believe we passed a bill and we need to go forward with it,” Hosemann said.

While Hosemann stressed the importance of passing the pay raise, he also conceded that passing an overall state budget for the coming fiscal year, beginning July 1, might be difficult. State revenue collections are expected to drop significantly during the coming months because of the dramatic economic slowdown associated with COVID-19. He said he and Gunn had been in communications with state agency heads asking them to look for ways to save funds during the final months of the current fiscal year to help alleviate some of the demands on the upcoming budget year.

While Hosemann said the plans are to resume the session where it ended in early March with business as usual, he conceded that some bills that normally would have passed might be sacrificed because of the focus that the Legislature might need to place on the pandemic.

For instance, he said leaders are exploring the possibility of purchasing for emergency situations a supply of medical masks, gowns and other items that have been in short supply at times during efforts to combat the pandemic.

And, he said there will be a focus on voting that was not present before the recess. He said laws might need to be amended to ensure the safety of people going to polls to vote if the coronavirus is still a factor during the general election in November.

“We need to pray it does not come back but prepare in case it does,” he said.

Hosemann said Senate Elections Chair Jennifer Branning, R-Philadelphia, and Sen. David Blount, D-Jackson, have been looking at elections laws. Blount has a background in voting issues. Hosemann did not commit as to what changes might need to be made, but said everything from expanding early voting in case of emergencies to providing more protection at the polls will be considered.

“We want every (eligible person) to vote and we want them to be in a safe environment to do that,” he said.

Hosemann said consideration also is being given to what safety measures will need to be in place in the Mississippi Capitol when the session resumes. Hosemann said the press will be allowed in the building to cover the session, but indicated that access might be limited to some groups to deal with the need to continue social distancing.

The post Hosemann says session to resume on May 18, business as usual plus pandemic response appeared first on Mississippi Today.