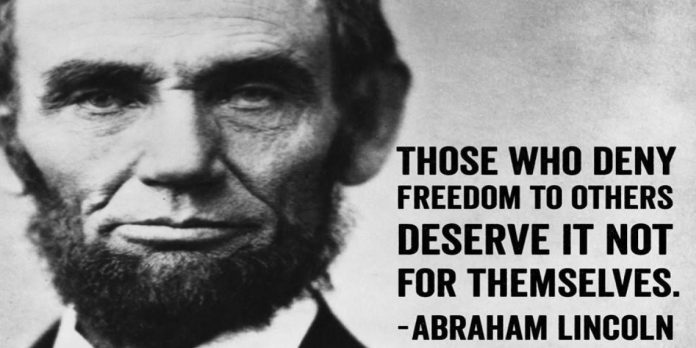 When is National Freedom Day Celebrated?

This day is a federal observance, but not a public holiday. That means we can (and will!) celebrate this day, but you probably won’t be getting the day off from work.

National Freedom Day celebrates freedom from slavery, and recognizes that America is supposed to be a symbol of freedom and liberty.

President Abraham Lincoln signed the 13th amendment on February 1, 1865. The states still had to ratify the amendment before it could become part of the Constitution. It became fully adopted on December 6, 1865.

Major Richard Robert Wright Senior, a former slave who founded the National Freedom Day Association, played a crucial role in creating the observance. Major Wright was deemed as a community leader in Philadelphia and was active in education, the media, business, and politics. He hoped to see a day that would be dedicated to celebrating freedom for all Americans. He worked to get the day recognized and got various leaders to support him. Wright was so well connected that he is reported to have known personally all the presidents from Rutherford B. Hayes (the 19th president) through Harry S. Truman (the 33rd president). He was almost ninety years old when he began to began to advocate for an annual commemoration of what he designated “National Freedom Day.” Wright invited national and local leaders to meet in Philadelphia to formulate plans to set aside February 1 each year to memorialize the signing of the 13th Amendment.

The first commemoration of such a day took place on February 1, 1942, although it was not made into law yet. A tradition of laying a wreath at Liberty Bell also began.

According to historian Mitch Kachun, Wright defined the purpose of the project in language that resonated with President Franklin D. Roosevelt’s Four Freedoms defining America’s goals for global peace: freedom of speech and worship and freedom from want and fear. The “adoption of National Freedom Day,” Wright said, was consistent with the principle articulated by President Roosevelt: “This principle implies that all men are not only equally entitled to all the freedoms, but some men in seeking to possess and enjoy these freedoms, must realize that they cannot have them without sharing them with others. In practice, they must prove that our declaration of freedom includes all men.”

At the age of 87, Wright traveled over 13,000 miles to rally support for the bill. Despite his efforts, the bill languished in Congress for five years before being defeated just a few weeks after Major Wright’s death in the summer of 1947. Wright was 92.

One year after Wright’s death in 1947, both houses of the U.S. Congress passed a bill without opposition to make February 1 National Freedom Day. The holiday proclamation was signed into law on June 30, 1948, by President Harry Truman. It was the forerunner to Black History Day and later Black History Month, officially recognized in 1976, though began by Carter G. Woodson in 1926.

How To Celebrate National Freedom Day

Many people in the United States reflect on and remember the importance of freedom on National Freedom Day. For some people, it is a time to promote goodwill, equality, and to appreciate our many freedoms. Wreath-laying at the Liberty Bell has also been a tradition to mark National Freedom Day for many years. Other events include annual breakfasts, luncheons, musical entertainment, film screenings, and literature meetings that explore the theme of freedom and celebrate the people, groups, and movements that led the way to the freedoms we now enjoy.

For yet others, Freedom Day may loom as a stark reminder that we still have a ways to go before we can truthfully say that all of us are truly free.