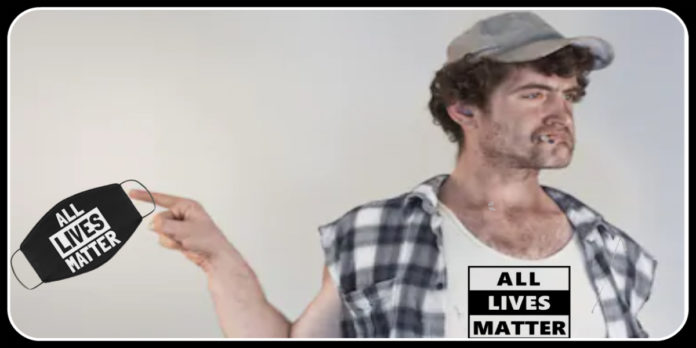 TUPELO- Following Mayor Jason Shelton’s executive order, all people inside the Tupelo city limits must now wear a mask in indoor public buildings. Not all Tupelo residents are happy with this.

“It sends a mixed message,” says Rusty Rollingham. “I work hard to give people a certain impression about myself, and wearing a mask just disrupts all of that.”

Rollingham was asked to elaborate.

“Well as you can see by my shirt, I am a supporter of the ALL LIVES MATTER movement. BUT, if I were to wear a mask, then it would appear that I actually mean that seriously and care for everyone’s well-being; it would seem like “ALL LIVES MATTER” is a creed I truly strive to live by and not just thinly-veiled racism.”

Additionally, Rollingham believes that a mask would truly interfere with his everyday life.

“Before the ‘virus’,” he goes on to explain with air quotes, “I could go out to the bar with my buddies and laugh at how stupid science is while breathing each other’s air. But now, if I show up to a bar wearing a mask, people will think I’m a rational person who may not always understand science but still believes it and trusts the experts who actually know what they’re talking about. They’ll think, ‘Dang, that there Rusty must not be getting his information from Facebook no more; he obviously has respect for and values all lives.’ And I just can’t have people thinking that.”

Rollingham was asked his opinion on the effectiveness of masks.

“If the virus was real, a mask ain’t gonna stop it. Bill Gates just wants to thin the population out by making people breathe their own carbon dioxide. Now I know it sounds stupid that a mask is too porous to minimize viral transmission but can magically keep oxygen, which is atomic and therefore smaller than a virus, from getting through, but that’s what I believe. And making me wear a mask is taking away my right to look like a dumb dumb.”